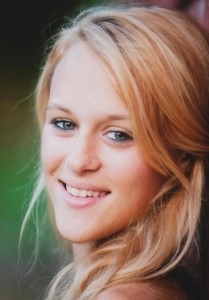 Rebecca also performs with several other women in Bob Warren’s “Only the Message Mattered”, a song cycle about the life of Susan B. Anthony.  They have traveled to many locations around the tri-state area to perform, and recently completed a recording of these songs.  Rebecca studies voice with Mrs. Nancy Jo Davidsen.

Rebecca has two older twin siblings, a brother and a sister, who are both 24 years old.  Her siblings also started performing at the Fort Salem Theater at a very young age, and continued to be involved in music related events throughout high school. Her sister, Sarah, continued theater through college, majoring in the subject, while her brother, Stephen went to college for video game designing. Although Rebecca’s parents have never been solo singers, they have always encouraged their children’s talents by driving them to endless rehearsals, bringing them dinner whenever practice ran late, paying for singing lessons, and buying new dance shoes when needed. Rebecca’s family believes that her, her siblings, and many of her other cousins who are musically talented, inherited their talents from their Great Grandmother, who was a singer/songwriter during World War II.

When Rebecca is not singing, she loves to bake, and try new recipes. She also loves being outside walking her dog, or playing some kind of sport. Throughout high school, Rebecca has played on the Varsity Basketball team, and Varsity Soccer team; soccer being her favorite sport. She also joined the track team this past spring for the first time.

Rebecca auditioned to four colleges, including Belmont University in Nashville, Ithaca College, SUNY Fredonia, and SUNY Potsdam, and she was accepted to all. In the fall, she will be attending SUNY Potsdam for their Crane School of Music program, studying the major of Music Education and Vocal Concentration. In her second year, she hopes to double major in Music Education and Vocal Performance.