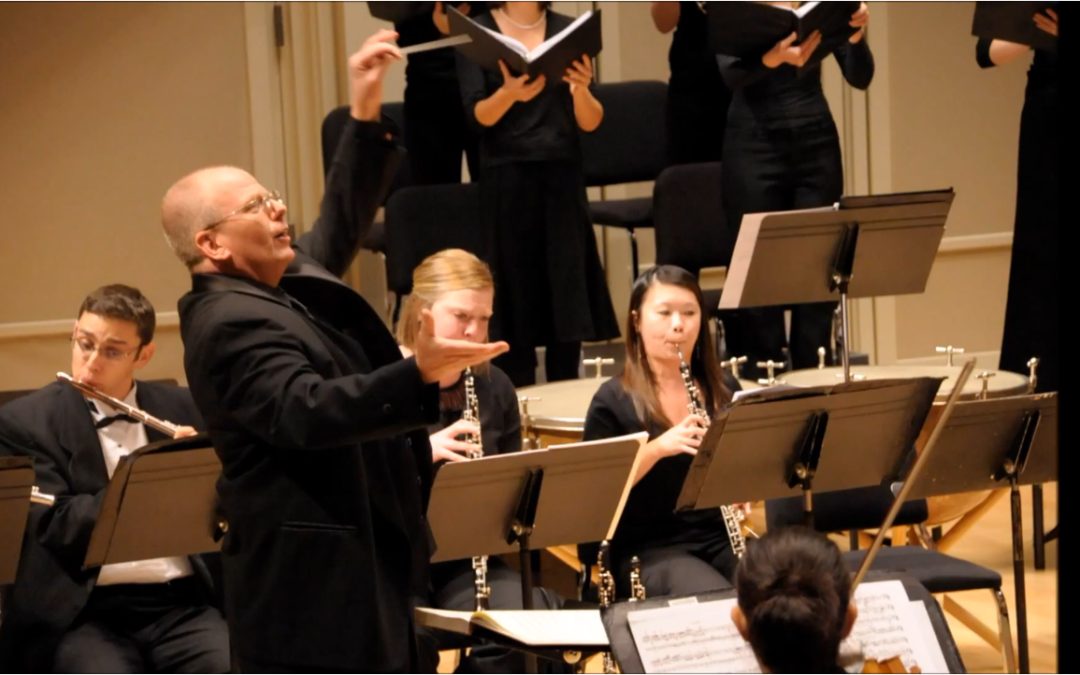 Our former Artistic Director, Dr. William Jon Gray, passed away on Wednesday, July 27, 2022. Bill led the former Burnt Hills Oratorio Society and was integral in the transitioning of the group to become known as Saratoga Voices. During his tenure from 2016-2021, we all benefited from his incredible talent, musicianship, historical accounting, and focus on choral and vocal technique. He truly enjoyed educating our chorus to fully understand and appreciate the music we performed, as well as the composers who had written it.

We value his contributions and leadership as our former artistic director. In other notable achievements, he successfully challenged our group by adding both a “Festival of Carols” in December and a musical cabaret in the winter, where we performed the work of Gershwin, Rodgers and Hammerstein, Cole Porter, and the Beatles. He leaves this world as a valued maestro in the choral community, as a passionate, altruistic musician, and we mourn his passing.

September 26, 1955 – July 27, 2022
The American choral conductor and music educator, Dr. William Jon Gray, 66, passed away in hospice care on July 27, 2022. He was surrounded by music and family.
William Jon Gray’s passion for studying, teaching, and conducting music started early in his life. As a youth he sang in the Cathedral Choir of Men and Boys in Albany. He was a 1973 graduate of Bethlehem Central High School in Delmar, NY, and credits Magdalene York, a teacher there, with influencing his career. ” I can honestly say Mrs. York laid the foundation of my entire career,” said Gray. “I didn’t realize it at the time, but the experiences I had with her really formed my love for music. She was a world-class musician who happened to teach high school. It wasn’t until I was a graduate student that I realized what a wonderful gift she had given me.” (The Daily Gazette, Schenectady, 2016)
Dr. Gray studied Vocal Performance at The Juilliard School; he obtained his Bachelor of Music degree in Vocal Performance from New England Conservatory of Music in 1983. His Graduate Study in Conducting and Vocal Accompaniment was at the Boston University College of Fine Arts, where he studied with Thomas Dunn and Allen Rogers (1983-1985). He received his Doctor of Music in Choral Conducting, Music History, and Organ Performance from Indiana University Jacobs School of Music in Bloomington, where he studied with Thomas Dunn, Marilyn Keiser, Jan Harrington and Carmen Helena Tellez (2008).
Throughout his career of teaching and conducting, William Jon Gray was respected and fondly regarded for his love of music, superlative scholarship, and his mentorship of aspiring singers, instrumentalists, and conductors.
From September 2000 to July 2014, Gray held the Chair of the choral department at the Indiana University Jacobs School of Music, where he conducted the Indiana University Pro Arte Singers – the university’s internationally recognized early music chamber choir – and taught graduate-level conducting, choral literature, and score reading. In July 2014, he was appointed Director of Choral Studies at SUNY at Albany, responsible for Chamber Singers, University-Community Chorale, Survey of Operatic Literature, Diction, and Conducting.
Dr. Gray served as Artistic Director of the Masterworks Chorus and Orchestra of Washington, D.C., from 1986 to 1993. He was Artistic Director of the Lafayette (IN) Master Chorale Singers from 1994 to 2010, conducting more than 100 performances of major choral works. With the Chorale Singers, he received national critical acclaim for the commercially released recording, “In Praise of the Organ: Latin Choral and Organ Music of Zoltán Kodály”.
In November 2012, “Jubilate”, a new recording of early and modern Christmas music was released, featuring the professional chorus and orchestra of Music of the Baroque, Chicago, where Dr. Gray served as Chorus Director from 2010 to 2019, collaborating with conductors Jane Glover and Nicholas Kraemer. From 2004 to 2006, he was associate conductor of the Carmel Bach Festival in California, leading major choral and orchestral works and preparing performances with internationally renowned conductor Bruno Weil.
Most recently, he was Conductor and Artistic Director of Saratoga Voices (formerly Burnt Hills Oratorio Society) and Music Director at the Church of the Immaculate Conception in Glenville, NY.
Dr. Gray is survived by his sisters Linda Alexander (Bruce) of Winchester, MA, and Stephanie Glisson (Bill) of Ravena, NY, and his brother Jon Gray (Kathleen) of Glenmont, NY; his nephews Daniel Glisson, Matthew Glisson, and Robert Alexander, and niece Kate Alexander. He was predeceased by his parents, Jon B. Gray and Virginia DeWitt Gregory.
A private burial will be held, with a memorial gathering at a later date. Condolence messages can be sent through Meyers Funeral Home, meyersfuneralhome.com
Please consider honoring Dr. William Jon Gray’s memory by donating to the musical organization of your choice.
To plant a beautiful memorial tree in memory of William, please visit our
Tree Store or plant a tree.