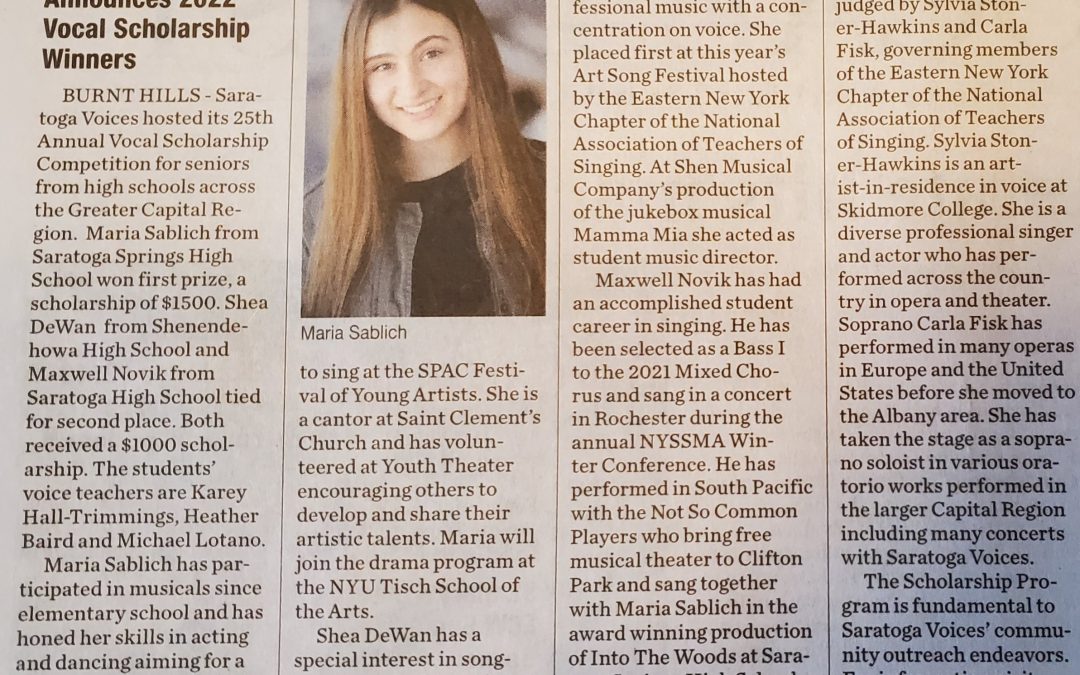 Maria Sablich has participated in musicals since elementary school and has honed her skills in acting and dancing aiming for a career in musical theater. In spring, she was selected to sing at the SPAC Festival of Young Artists. She is a cantor at Saint Clement’s Church and has volunteered at Youth Theater encouraging other to develop and share their artistic talents. Maria will join the Drama program at the NYU Tisch School of the Arts.

Shea De Wan has a special interest in songwriting and will continue her education at Berklee College of Music to study music business and professional music with a concentration in voice. She placed first at this year’s Art Song Festival hosted by the Eastern New York Chapter of the National Association of Teachers of Singing. At Shen Musical Company’s production of the jukebox musical “Mamma Mia,” she acted as student music director.

Maxwell Novik has had an accomplished student career in singing. He has been selected as a Bass I to the 2021 Mixed Chorus and participated in a concert in Rochester during the annual NYSSMA Winter Conference. He has performed in South Pacific with the Not So Common Players who bring free musical theater to Clifton Park since 2001. Maxwell and Maria sang with the SSHS Choraliers. All three students participated in the NYSSMA Solo Festivals.

The competition was judged by Sylvia Stoner-Hawkins and Carla Fisk, governing members of the Eastern New York Chapter of the National Association of Teachers of Singing. Mrs. Stoner-Hawkins serves as the board president and Mrs. Fisk is on the advisory board. Sylvia Stoner-Hawkins is artist-in-residence in voice at Skidmore College. She is a diverse professional singer and actor who has performed across the country in opera and theater. She received her Doctor of Musical Arts degree from the University of Kansas.  Soprano Carla Fisk has performed in many operas in Europe and the United States before she moved to the Albany area. She has taken the stage as a soprano soloist in various oratorio works performed in the larger Capital Region including many concerts with Saratoga Voices.