Applicants need not be planning a career in music, but the scholarships are intended to facilitate the continued study of singing in undergraduate institutions. The winners will also have an opportunity to perform in a future SV concert.

48 scholarships have been awarded over the years. One winner became a national opera star, and many others have enjoyed professional solo careers. Saratoga Voices is proud to showcase their talent on a regular basis.

Saratoga Voices embraces the choral arts within a vibrant, collaborative, and skill-nurturing environment, striving for excellence in choral performances, including diverse artists and audiences to share the joy and power of singing.

“If it involves singing, we love to do it”
William Jon Gray, Artistic Director, Saratoga Voices

The winners shall provide to Saratoga Voices the address of the college or university program to which they have been accepted. The scholarships will be forwarded, in their names, directly to the institutions.

Candidates are to complete an application form and mail to Susanne Margono, chair of the Vocal Scholarship committee.
Applications must be received by May 14, 2021.

What Do I Sing?

How are the winners determined?

This is a complete list of singers who have been awarded a vocal scholarship from Saratoga Voices / Burnt Hills Oratorio Society since the scholarship was created in 1998. 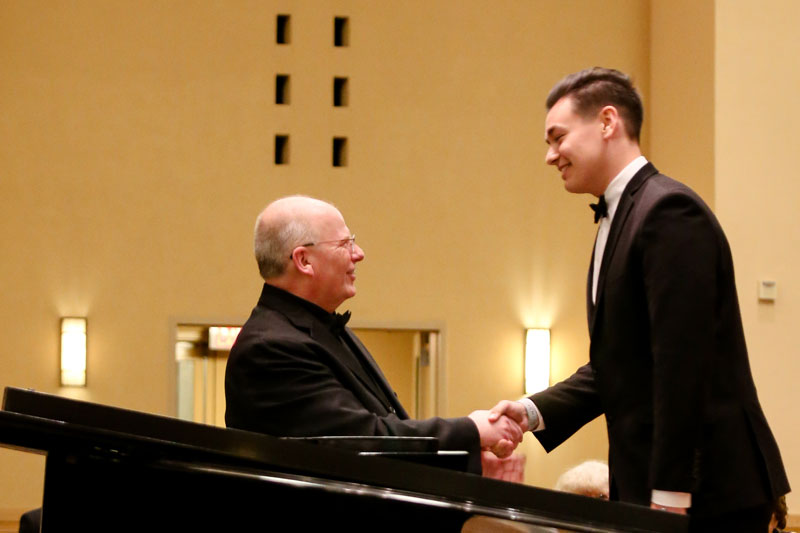 What are people saying about Saratoga Voices!

"I have worked with the Burnt Hills Oratorio Society since 1984 from the tenure of Glenn Soellner to its current director William Jon Gray. I have been concertmaster of the orchestra for most of that time, as well as contractor. The passion and enthusiasm for singing the chorus displays is both contagious and delightful. Under the leadership of Bill Gray and Derek Stannard the quality of singing continues to refine, and it's a joy to make music with the group. Bill's leadership a few seasons ago of Haydn's Creation was one of the highlights of my many years of orchestral playing. Here is wishing BHOS an incredible next 50!!"

"Singing with Bill and Derek is a thrill, not only because of the programming and level of quality to which we aspire, but because every rehearsal is a music education class. Whether it's the historical events surrounding a piece, something in the life of the composer, or the performance style of a musical period, I don't think I've ever left a rehearsal without learning something new."

"Our desire is to broaden the definition of what we do."

"If it involves singing, we like to do it."

"I discovered a musicality I didn’t know I had. The experience has transformed me as an artist."

"The magic of the Burnt Hills Oratorio Society is that its mission is not derived from the charisma of any individual, but from its devotion to great music and to coming together as a group to create something which is more meaningful than anyone could produce by oneself. Singing in the Burnt Hills Oratorio Society allows participants to contribute at their own highest level of personal intellectual commitment, physical control, technical discipline and to gain new strength and self-respect through this common endeavor."

"Every rehearsal with Bill and Derek is like attending a vocal master class."

I really appreciate the opportunity the Oratorio Society gives to High School singers through the Spring competition. Music and singing are so important to me and it really was a wonderful compliment to be recognized during this competition. I leave for college on Tuesday to further pursue my acting and singing and I want to thank you again for the scholarship money. The Oratorio Society does great work instilling confidence in young singers.

When open calls came for the group I came running, paid for the entire season. I plan on coming for the next open call... cuz I LOVE singing. I enjoy it. I relish it and it's in me. This is where I want to be.

I leave every rehearsal with a song in my heart.

Our director continues to amaze me with his knowledge.